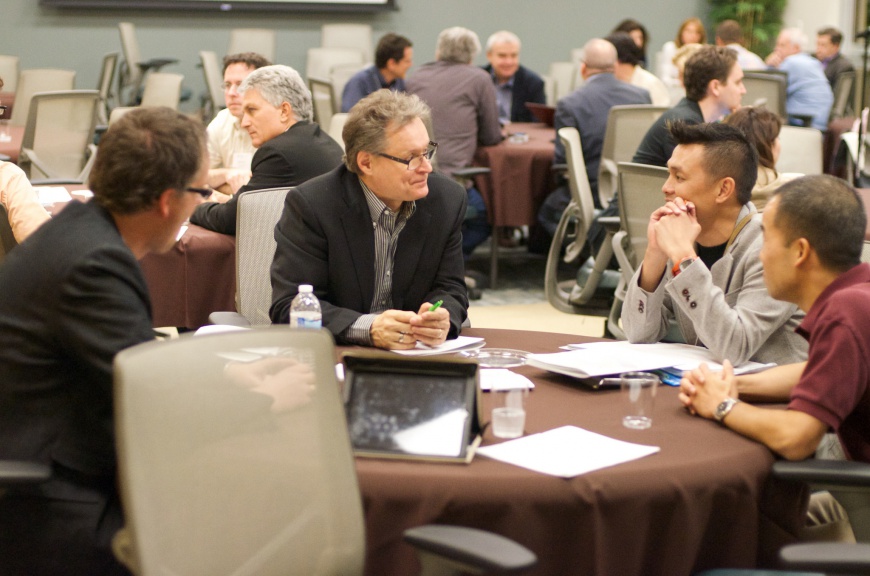 Participants came from traditional to new media backgrounds, including radio, television, film, journalism, and social media. ‘These leaders were chosen as participants because of their expertise in media, their passion to use media for mission and evangelism, and their desire to intentionally collaborate together’, says Naomi Frizzell, Participant Selection Team Convener and Vice President of Global Media at RBC Ministries.

The consultation emerged from The Cape Town Commitment’s call for ‘a renewed critical and creative engagement with media and technology’. Wayne Pederson, Chair of the consultation and President of HCJB Global, explains, ‘The goal of the consultation was to create a roadmap for the effective use of media to reach the next generation around the world with the gospel’. Lars Dahle, Lausanne Senior Associate for Media Engagement, adds, ‘If the whole church is to take the whole gospel to the whole world, media engagement becomes a highly significant issue’.

Phil Cooke, Co-Founder and President of Cooke Pictures and internationally known writer, speaker, and blogger, led the first evening plenary. He spoke on the inundation of information and media in the world. As a result, ‘It’s not the best message that gets through anymore; it’s actually the message that knows how to cut through all that clutter and get on the radar and get noticed’. Highlighting case studies from global brands like Nike and Starbucks, he explained the necessity and importance of branding ‘in a culture of unlimited choice’. He challenged participants: ‘Everything communicates. How does your story cut through?’

Theodore Asare, Founder and CEO of Theovision International in Ghana, and Finny Philip, Lausanne International Deputy Director for South Asia, started each day with Bible expositions on the theme of the gospel and media. The mornings continued with table discussions and related plenary sessions. Phill Butler, Lausanne Senior Associate for International Partnerships, expounded on the importance of partnerships in media with individuals and churches. Craig Detweiler, Director of the Center for Entertainment, Media, and Culture at Pepperdine University, discussed the reality of media’s influence on personal lives: ‘Connected to the world, but disconnected from each other … Our network lives allow us to hide from each other even as we’re tethered to each other. We’d rather text than talk’. He raised implications for gospel communication: ‘If we believe in an embodied faith, then we might really need to get back to that. We might need a theology of embodiment to battle a world of disembodied relationships. We may be the last place of physical provisions, physical touch, physical contact, and if so, become the countercultural revolutionaries for the 21st century’.

Task forces met in the afternoons, each group focused on a specific media platform. ‘I was amazed and surprised at the high level of engagement and passion of participants from around the world with a common passion for media outreach’, remarks Wayne Pederson, ‘the high level of interaction and energy was an inspiration and encouragement to those who work faithfully to share God’s love through the diverse media tools God has given us today’.

In the final evening plenary, participants were challenged by Ruth Limkin, pastor, writer and media consultant, and political advisor in Queensland, Australia, to leverage social media and create opportunities to engage in public conversations that are ‘gracious’ and ‘brave’. Citing compelling examples of positive blog posts that led to significant and tangible change, she challenged participants to use media to call people to a positive vision of what could be rather than simply criticizing people. ‘It’s more effective to give people a bigger vision to say yes to, than focusing on what we want them to say no to’.

‘Our prayer is that years from now we will look back at the consultation as a seminal moment in engaging the next generation with the Good News. That we can be winsome, influential and effective in sharing God’s redemptive plan to a broken world’, Wayne Pederson shares. ‘By the time we concluded, this diverse team of media professionals uncovered strategies and tools, which will allow us to use media, especially social media, to engage the culture and reach the hard to reach places where Christ is not known’. These ideas and conclusions have been summarized in a written statement with a Call to Action for the global church’s engagement in media.

A Lausanne Occasional Paper (LOP) from the consultation will be published in January. A media engagement network is also being launched, comprised of media professionals who will collaborate on further action plans.